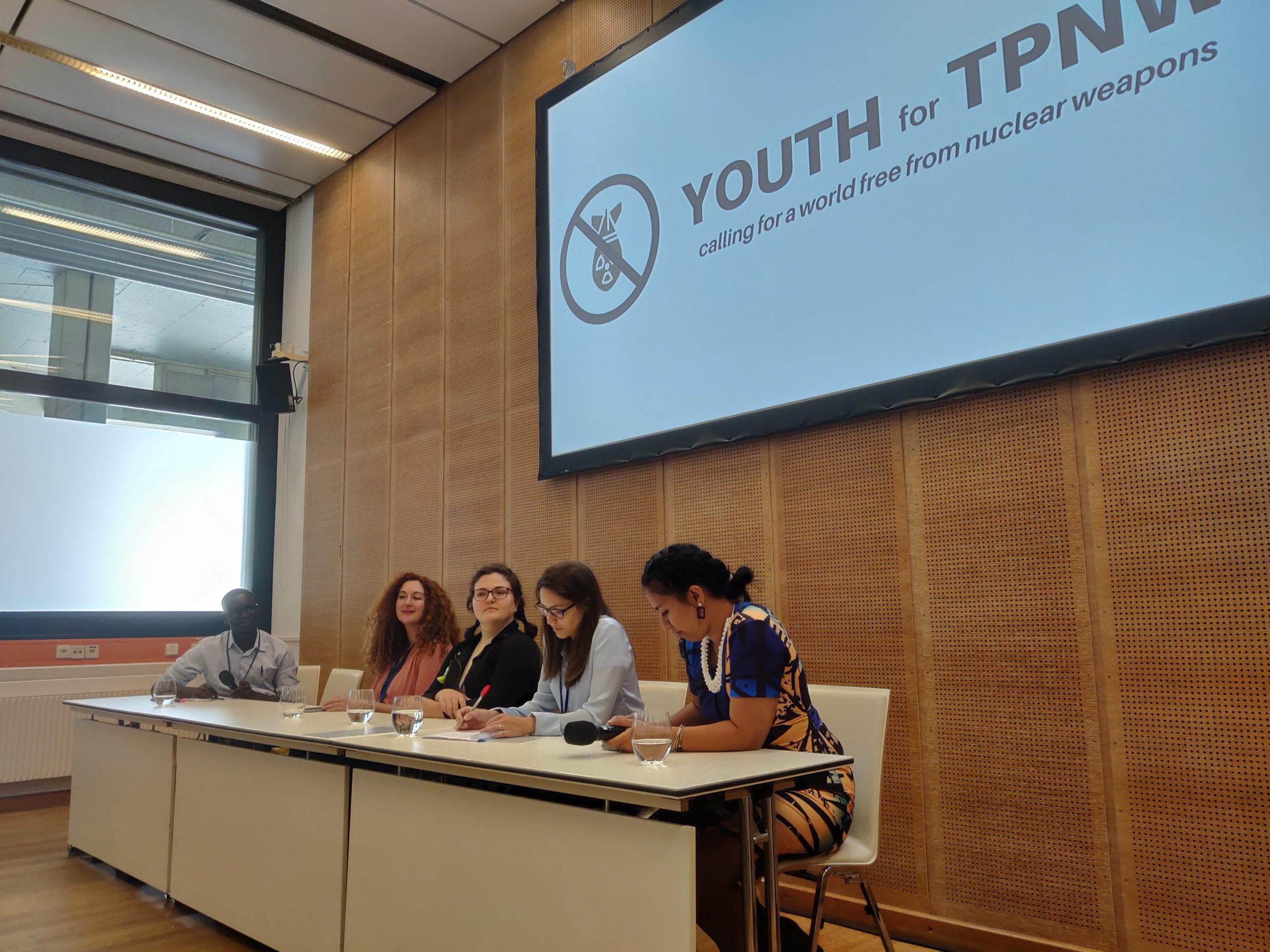 Written by Thomas Pitt
About the Author:
Thomas Pitt is a nuclear disarmament activist from the UK. He attended the ICAN Paris Forum in 2020 on behalf of CND Cymru and the TPNW’s First Meeting of States Parties in Vienna as part of the ICAN delegation. He is also a contributing writer to the disarmament magazine Heddwch.

If those in favour of maintaining a nuclear arsenal were forced to condense their arguments down to a single word, there is a high chance that many of them would choose ‘deterrence’. From their perspective, this word performs a number of useful functions. First, it puts the emphasis firmly on preventing war, with the implication that nuclear weapons act as a guarantor of people’s safety by diminishing the threat of an invasion. Second, it also suggests that nukes play a role in the maintenance of a stable international order.

To take the UK as a case study, in the 2016 parliamentary debate on the renewal of the country’s nuclear weapons programme, Trident, the words ‘deter’, ‘deterrent’ and ‘deterrence’ were used over 250 times.[1] Then Prime Minister Theresa May described Britain’s nuclear weapons as ‘essential’ to ‘preserve our way of life for generations to come’. Others contended that millions of lives had been saved as a result of the nuclear deterrent, with Conservative MP James Cartlidge going as far as to say that ‘they [nuclear weapons] have given us the most beautiful thing […] they have given us peace in our time’.

Cartlidge, incidentally, had begun his contribution by referring to his visit to the Auschwitz museum, which he cited as the main image compelling him to vote in favour of renewal. The flaws of the argument that the Holocaust could have been avoided if only the bomb had been invented fifteen years earlier barely need pointing out (and, alas, the world has not exactly been genocide-free since 1945), but this example illustrates clearly the centrality of deterrence to the anti-disarmament side of the debate.

Two key questions suggest themselves when evaluating this line of argumentation: are nuclear weapons effective in deterring other countries from engaging in conventional armed conflict? And, does what could be termed the ‘deterrence doctrine’ increase international stability? Even if the answer to both questions is yes, this may not necessarily amount to a credible justification of nuclear weapons; after all, these are broadly strategic considerations rather than moral ones. Nevertheless, those championing deterrence need to be able to address these questions as a bare minimum, and it is therefore worth examining them in more detail.

Let’s start with a fact: global deaths due to conflict have generally been in decline since the mid-20th century[2], with wars between ‘Great Powers’ the lowest in centuries.[3] Unsurprisingly, supporters of deterrence tend to attribute this decline to the development of nuclear weapons, with which it coincides. More sceptical observers might point to other important factors: for instance, the rise of international institutions such as the UN or the increase in global trade.

Who is right? Given the vast changes the world has seen since the Second World War, it seems highly implausible to suggest that the presence of nuclear arms is the only factor in play. Establishing the relative importance of these various factors, however, remains highly contentious and subjective. Indeed, the main issue with this particular debate is that it inevitably leads into the dubious realms of counterfactual history. Since history cannot be re-run, the claim that nuclear weapons have helped to keep the peace cannot be falsified. It is thus more of a belief or supposition, rather than a verifiable theory.

In a 2018 essay, David P Brarash made a well-stated case for the counter-argument, that deterrence is a myth concocted to suit the interests of nuclear-armed states.[4] Barash points to the lack of evidence that deterrence has worked and lists a number of wars in which nuclear-armed states have been involved, including attacks on nuclear-armed states by non-nuclear opponents. Nonetheless, this too is no slam dunk; it is still possible to maintain that, even though nuclear weapons have not eliminated conventional warfare, wars have been comparably fewer and smaller in scale because of them. In short, the debate can never be truly settled on way or another.

For disarmament advocates, this poses a dilemma: is it even necessary to refute the claim that nuclear weapons act as a deterrent? After all, it would be perfectly viable to argue that, deterrent or not, the consequences of a nuclear war (or even a single nuclear strike) would be so catastrophic that the mere existence of nuclear weapons poses an unacceptable level of risk. There is also a danger of the debate getting bogged down in the dispute over deterrence, diverting attention from the real risks of nuclear war (not to mention testing and accidents) and its humanitarian consequences. On the other hand, failing to challenge the deterrence claim could be seen as effectively conceding on what supporters of nuclear weapons see as their core argument.

Does ‘Deterrence’ Make us Safer?

Irrespective of whether possession of nuclear arms is or is not effective as a deterrent, there can be no doubt that the notion of ‘deterrence’ plays a key role in nuclear strategy. As long as nuclear-armed states continue to base their security policies on this doctrine, the d-word cannot be ignored, even by its sceptics.

There are a number of inherent risks presented by deterrence doctrines, many of which are well documented. First, it relies on the absolute rationality of the actors involved, something that cannot be guaranteed. There is also the risk of a misunderstanding or technical fault triggering a crisis. Furthermore, in the event of tensions or conflict involving one or more nuclear-armed states, any escalation brings the world closer to a situation where nuclear weapons could be used, with leaders ending up in a position where refraining from taking the nuclear option could make them look weak or indecisive. It is no coincidence that Nikita Khrushchev was removed from office within two years of the Cuban Missile Crisis, for instance.

All of these dangers have been exemplified in the ongoing conflict in Ukraine. In addition, those believing in the effectiveness of nuclear weapons as deterrents would surely have to admit that the grim logic of deterrence has been turned against them. Although the overt nuclear threats that characterised the early phases of the war have ceased for now, the fact remains that a nuclear-armed state is using its nuclear arsenal to backstop an invasion of another country and dissuade that country’s allies from getting too deeply involved. From a Russian perspective, this strategy has had the desired effect. Surely, one would imagine, the fact that the threat of a nuclear attack is being used to reinforce a war, rather than prevent it, should give deterrence advocates pause for thought and force them to recalibrate their line of reasoning, as argued by Anant Saria on this blog recently[5].

However, in the main, supporters of deterrence have doubled down on their position. In some cases this has taken the form of suggesting that Ukraine should never have agreed to the decommissioning of the nuclear weapons stationed in the country following the collapse of the Soviet Union. The American conservative commentator Jeff Jacoby has even contended that Taiwan should seek to acquire nukes as a defence against China.[6] There is perhaps an element of the ‘good guy with a gun’ psychology so beloved by the American Right in this particular example, and this remains a fringe view. Nonetheless, the logic that underpins it is revealing, and it is shared by the more mainstream body of pro-nuclear opinion.

It goes without saying that, in Western eyes, the Russians are the ‘bad guys’. Russia, for its part, seems content to play this role with aplomb, with fresh evidence of war crimes committed by the Russian army emerging almost on a daily basis as Ukraine recaptures territory lost earlier in the war.[7] Russia’s vetoing of the outcome document at the 10th NPT Review Conference only adds to the perception of its inherent nefariousness. That being said, there is no reason why the nuclear-armed NATO member countries, for example, couldn’t also use the threat of nuclear war to backstop an invasion. Indeed, anyone who knows their Cold War history will be aware that the US in particular is no stranger to invading non-nuclear-armed states.

Regardless, it is this binary worldview, pitching the ‘free world’ against dictatorships, that permits supporters of deterrence a sleight-of-hand. Instead of weakening their conviction in the infallibility of deterrence, the invasion of Ukraine has only added extra weight to the perceived need for a robust Western-backed deterrent to counterbalance Russian aggression. However, one doesn’t have to look very far to notice that dividing the world into good countries and bad ones paints an overly simplistic picture of global politics. To give just one example, amongst the small group of states who have explicitly backed Russia over Ukraine and blamed the crisis on Western provocations are Venezuela and Cuba.[8] And yet, both these countries were in Vienna as full States Parties to the TPNW, with Cuba in particular playing a leading role in trying to rid the world of nuclear weapons.

It is also a strange sort of morality whereby the wrongfulness of an action is judged by the regime that perpetrates them. A nuclear bomb dropped by a democratic state would cause just as much devastation as a comparable bomb dropped by a dictatorship. When thought of in this light, it is clear that the debate over deterrence is skewed. Its dangers are inherent and are not conditional on the nuclear-armed state in question. The invasion of Ukraine has indeed cast further doubt on the notion that nuclear weapons prevent conventional wars, but irrespective of this consideration, the real question remains whether the deterrence doctrine in its current form is the best way to safeguard global security for future generations. It is a question that answers itself.